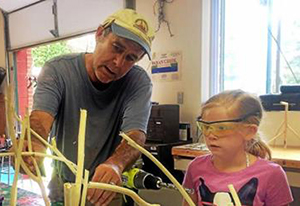 I wear the hat of both artist and arts administrator. The ranking by NCAR was a surprise to me. Rarely does Bennington County gets recognized on a state level not to mention nationally. For 27 years I have called Bennington home. This southwestern rural corner of the state is often referred to as “the armpit of Vermont” with much of the attention and resources directed to the north; Burlington area, home of Ben & Jerry’s, Bernie Sanders and Lake Champlain.

My life is the arts and supports my family. Being recognized validates what I do in the arts. I feel individual artists have a harder time seeing their role in this ranking compared to the organizations. The NCAR ranking confirms local art organizations' purpose and mission. It articulates “why” in terms that those "not of the choir" may understand.

Art advocates like myself find ourselves living in a world where, if you’re not at the table, you’re on the menu. Being mentioned as taking part in this recognition as an artist and organization, places us at that table. It commends all of us - theatres, museums, galleries, presenters - and strengthens the hopes of musicians, visual artists, poets, actors, café owners, music shop proprietors, etc. to hang in there, don’t move away, and be part of this change. This also plays a role in reminding the youth of our area that once they go out into the world to attend college, to consider coming back to this rural town they call home; it’s not so bad after all. We have things going on.

The wheels of change have been in motion already for the past few years, the stars of creativity are aligning and it’s hard to say why now.  I think creativity is seen more now as a gift not only that an artist holds, but also techno-entrepreneurs, designers, chefs, farmers, brewers of beer and inventors. Our somewhat isolated, geographic location has seen its neighbors to the south prosper through the arts at MassMoca. It is inspiring. Bennington’s history is deep in culture and arts and making the shift thru this portal to today’s arts scene is challenging but is happening!

Matthew’s commercial visual art has appeared in several regional and national publications. His paintings and sculptures are inspired by his surroundings whether in Vermont or through his travels in Europe, Brazil and Central America where he also has exhibited in group and solo shows. In 1994, Matthew co-founded the Vermont Arts Exchange (VAE) and began teaching visual art to individuals in his Sage Street Mill studio. He works with youth at risk, the elderly, local schools, Head Start children and the general community. His “Healing Arts” work includes 20 year partnership with both the Vermont Veterans’ Home and developmentally delayed adults through United Counseling Service. His work through VAE has been recognized with awards from The Preservation Trust of Vermont, Orton Family Foundation, The National Endowment for the Arts, New England Foundation for the Arts, Vermont Arts Council and the Vermont Community Foundation.