In High Gear: The NCAR Dashboard 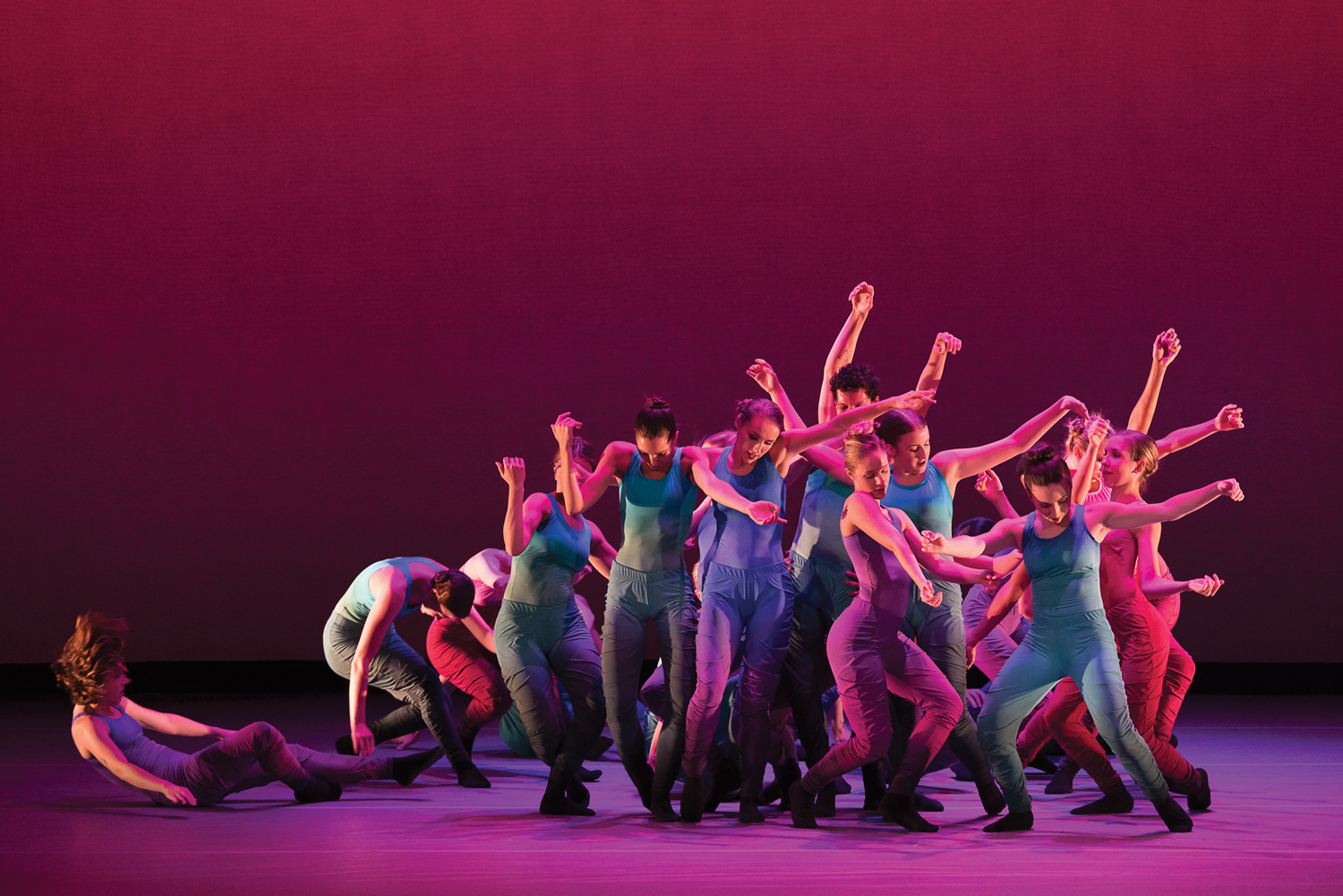 It was a tough time for arts organizations; the much older and larger Dallas Ballet had just announced it was facing financial distress, and folded soon after. And Drew had no professional arts training. For the previous 12 years, she had held accounting and management jobs at ARCO Oil and Gas Co. But she knew how to use data. Over countless hours, she studied DBDT’s books, organized and analyzed information, and conducted feasibility studies and audience surveys. After weeks of assessment, she was able to share metrics with board members and prospective donors. The metrics, such as the expected ticket sales resulting from increased marketing, showed them the return they could expect on their investment in the company’s growth plan.

The strategy worked. During Drew’s tenure, the programs, performances, audiences and revenue BDT operates with an annual budget of $4.9 million – up from $175,000 in 1987.

But analyzing finances and performance no longer has to be a manual, time-consuming job for arts leaders. Now, when Drew wants to assess DBDT’s financial and management performance, she turns to a new, free online dashboard from the National Center for Arts Research at SMU (NCAR).

BUILDING THE CAPACITY TO IMPROVE

The easy-to-use NCAR dashboard allows arts organizations to assess themselves on 24 broad measures in such areas as revenue, expenses, marketing and staffing, and see how they compare to peers throughout the U.S. that are similar in size, field of interest, and audience and community demographics. Known as the KIPI Dashboard (“KIPI” stands for Key Intangible Performance Indicators), it launched in 2016; Drew was an early tester.

“With this free tool, arts organizations can more easily gauge how well they’re doing in the areas that are important to them, and can make more informed decisions to reach their particular goals,” says Zannie Voss, director of NCAR and professor of arts management and arts entrepreneurship in SMU’s Meadows School of the Arts and Cox School of Business.

Moreover, adds Drew, the tool gives arts philanthropists information to help them make donation decisions. “Donors are able to get a better feel for how to evaluate programs and their return on time, money and resources,” she says.

For smaller organizations in particular – which represent most arts and cultural nonprofits – the KIPI Dashboard provides a highly sophisticated diagnostic and analytical capacity they otherwise likely would lack, says Drew, a founding member of the NCAR advisory board.

Dwight Walth, director of cultural facility and grant services in the Phoenix Office of Arts and Culture, is a proponent of the KIPI Dashboard. Walth encouraged a number of nonprofits that receive grants from his agency to sign up for one of NCAR’s monthly dashboard webinars.

According to Walth, the arts sector represents a volatile marketplace, and the business model for arts organizations can be complex. In many ways, he says, nonprofits face “different kinds of stresses and issues” than for-profit companies, including their overall dependence on both contributed income and earned income.  Nonprofits often get special grants “that can go away next year, so it’s just sort of riding waves of production and exhibits that go well and don’t, special exhibits that do well and don’t,” he says.

“Clearly, what the dashboard offers is a way for the organization to tell the story of their successes and challenges beyond the raw data by looking across the sector peer group as a whole,” he says. “An organization would then have a powerful tool to show to their board of directors and to funders to put in context how they’re doing. They could see in their trend reports, in the trend data or in the final score within an index, that they are performing lower or higher than they would expect.

“And when they dip into their scores, they get trend information and details about how they can increase their score, what factors need to change to increase a score.” 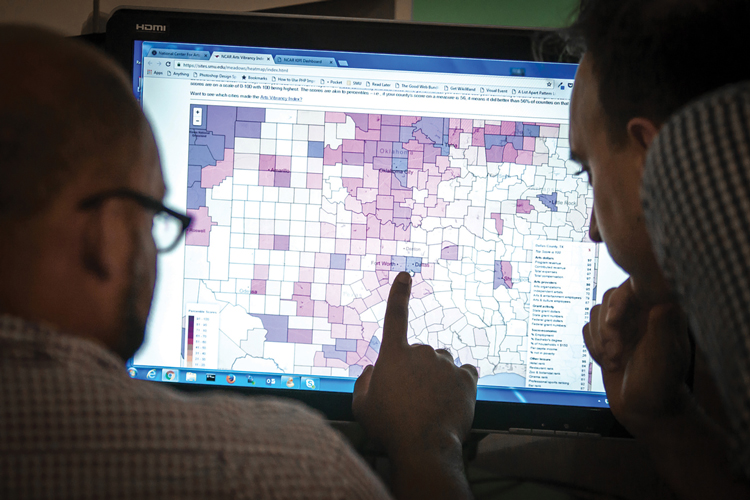 INSIGHTS FOR BOARD MEMBERS

In June 2016, when the Dallas Black Dance Theatre launched a new strategic plan, its board wanted a clear sense of the financial baseline from which it was setting out, and how it compared to peer organizations throughout the U.S. As a relatively small organization, the board also wanted to know how it stacked up against peer groups in contributions from board members.

Among several other aspects, the DBDT learned from the new tool that its board donations covered eight percent of expenses – two percentage points higher, on average, than expenses covered by boards of larger arts groups such as symphonies.

The Dance Theatre now uses information from the dashboard throughout the year as it recruits prospective donors and board members who otherwise might not have wanted to get involved because of the mistaken belief they “can’t make much of a difference,” Drew says. 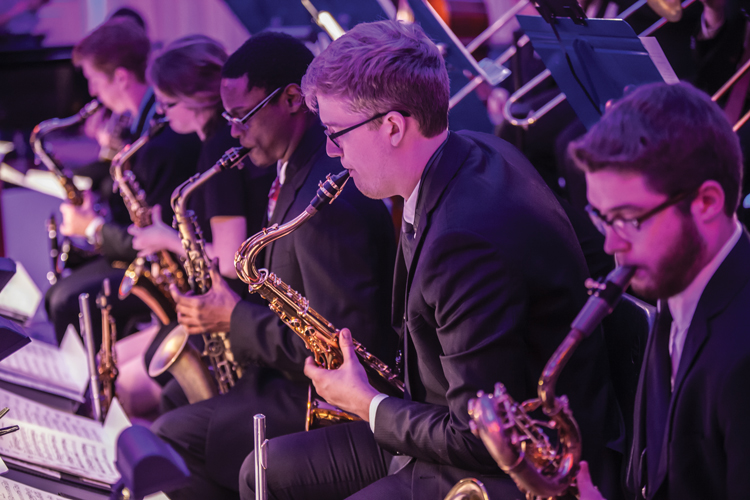 The dashboard has been a goal that Voss and her team at the National Center for Arts Research have been working on since NCAR’s founding in 2012. NCAR was created to assess the health and stability of the arts sector in America by compiling and analyzing the most comprehensive set of data ever assembled on the arts industry. The dashboard is the next evolution of NCAR, providing a free, customized resource that allows arts organizations to look at their own performance relative to the field.

The dashboard draws on data from nearly 8,000 cultural nonprofits that have submitted their information to NCAR partner DataArts over the past five years. The dashboard lets an organization access its own confidential, individual scores that show how it ranks relative to its peers in nine broad indices of finance, operations and attendance. Each index consists of multiple metrics.

The dashboard gauges tangible factors that affect performance, such as an organization’s age, sector and marketing budget, as well as intangible factors such as good decision-making and artistic

Arts leaders can track their company’s performance in each index over five years, and use what they learn as a catalyst to inform and guide their staff and board in planning, decision-making and development.  A nonprofit could use the dashboard to conduct a benchmarking analysis, for example, before undertaking a capital campaign.

And by clicking an “Increase My Score” button on the dashboard, nonprofits can see what they would have needed to do to improve performance in areas such as attendance, corporate contributions or return on fundraising.

The dashboard also features articles on best practices for each of the nine indices. They range from governance and contributed income to community engagement and staffing.

And while NCAR does not provide consulting services itself, its website features a list of national consultants it has worked with over the years that dashboard users can turn to as they work to improve their performance.

The KIPI Dashboard represents a collaboration among a network of partners, including Philadelphia-based DataArts. Founded in 2004 as the Cultural Data Project by a Pennsylvania group of public and private grantmakers and advocates, DataArts now has collected data from 16,000 arts, cultural and science organizations throughout the U.S., ranging from ballet and opera companies to symphonies, museums and performing arts groups.

Those nonprofits – about 15 percent of the roughly 100,000 cultural nonprofits in the U.S. that file Form 990 returns with the IRS – have completed annual Cultural Data Profiles for DataArts totaling several million data points.

“DataArts was started to better understand how to help cultural nonprofits become more sustainable,” says Beth Tuttle, DataArts president and CEO. “The organizers were in the business of giving grants and investing in cultural nonprofits, and were seeking greater insight into those nonprofits’ financial and operational health.”

Also prompting creation of the effort, she says, was the overall “lack of detailed data in standardized form to help make decisions as funders, to look at trends and figure out what actually was happening with organizations they were funding.”

The millions of data points represent an unparalleled, broadly available asset for the cultural sector.

Both arts organizations and granting organizations make use of the Cultural Data Profiles. Arts organizations that submit a profile are then able to generate a variety of analytics and reports, such as balance sheets and annual reports; apply for grants; and more. Funders, many of whom require grant applicants to submit data to the profile, can get a report from DataArts for each individual applicant, and can compare applicants to peers and see grantee trends.

Completing the Cultural Data Profile is also the first step in creating an individual KIPI Dashboard. Nonprofits that complete a profile can then seamlessly access the dashboard from either the DataArts platform or NCAR website.

Large arts organizations like museums and symphonies “have become increasingly sophisticated about understanding their communities and how to do targeted marketing that understands where in their community their attendees come from and which are more loyal,” says NCAR Director Voss.

Yet the vast majority of arts organizations in the U.S. are small and lack the financial and human capacity to use data to improve their performance and drive their growth, says Voss, a former man- aging director of the PlayMakers Repertory Company at the University of North Carolina at Chapel Hill.

To help equip them with that capacity, NCAR is developing a new tool, known as an “audience development heat map,” that will show arts organizations the “likelihood of purchase” for households in every census tract within 20 miles.  “If my goal is to increase purchases, I can look at census tracts and my own organization’s ticket sales, and see areas we haven’t targeted,” she says. Or if an arts organization wanted to diversify its audience by attracting younger or more culturally diverse people, the interactive map will help target areas where those audiences live.

The tool, expected to be launched in 2018, will be designed to be “flexible enough for organizations to use that have different marketing objectives,” and will help small and mid-size nonprofits with limited capacity better understand their audiences and target their marketing, says Voss, who also is a member of the DataArts board.

People-per-program-offering – a key metric – generally has declined over time, for example, while the number of offerings has grown. And funders sometimes press cultural groups to come up with new initiatives. As a result, arts organizations are looking for ways to market themselves and their new programs more effectively.

Cultural organizations also have seen the share of their budgets provided by government funding decline, on average, from 5.4 percent in 2011 to 4.8 percent in 2014, she says.

And with the White House and Congress considering elimination of agencies like the National Endowment for the Arts, Voss says, the cultural sector could lose a key source of funding that typically helps drive support from state and local funders, both public and private. In rural areas that lack philanthropic capacity, NEA funding can be critical.

The KIPI Dashboard and the planned heat map from NCAR are tools that give cultural nonprofits otherwise hard-to-get data that make it easy to track their performance, compare themselves to peer organizations, and inform planning and decision-making by their board and staff – along with articles on best practices and success stories – to drive continual improvement, Voss says.

“We are at a moment in time in the field of arts and culture when we’re finally starting to have robust data from the organizations themselves,” she says. “These tools are intended to give them additional knowledge from their own data, useful to them on a personalized basis, to help them move the dial in the performance areas that are important to them.”

Tuttle, who serves on NCAR’s advisory board, says smart, well-organized data is critical for cultural organizations. “Data plus stories equal impact,” she says. “Data alone doesn’t tell the story. Anecdotes alone don’t make the case. But you put those two things together, and you can tell a much more compelling story to a broader set of listeners. And that is imperative in the current political context we’re in.”