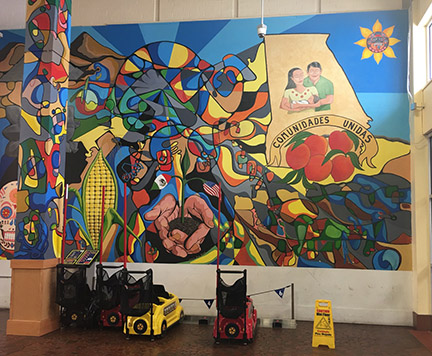 The corpus of non-federal arts and cultural research on vibrancy has typically focused on large urban metros or statewide or regional scales. Rarely has the inclusion of small cities, towns, and villages factored into the broader arts ecosystem at the national level. The publication of SMU’s National Center for Arts Research (NCAR) third annual Arts Vibrancy Index contributes to this growing research focus by disaggregating medium and small U.S. cities into separate lists. The value of analyzing each municipal geographic scale independently allows artists, arts service organizations and allied not-for-profit organizations, local and regional governments, and the private sector to understand hyper-local characteristics through an asset-based approach. As a scholar of urban planning, policy, and migration studies, my research resonates with two of the Index’s key takeaways:

My research focuses on the ways ethnic culture and shifting demographic patterns are re-shaping the built environment of new immigrant destinations – gateway areas that were previously uninhabited by growing new ethnic populations. Many of these new immigration destinations are forming outside of the central city area of large coastal cities into formerly rural and often recently incorporated suburban municipalities. While these communities have become the frontier of migrant resettlement as much for refugees as they are for voluntary immigrants, they remain largely unprepared to accommodate the distinct cultural traditions or distinct needs of immigrants. The scale of small municipalities affords them a distinct advantage to gage pressing state and federal policy concerns and respond to the changing locational balance of ethnic populations. This is evident in NCAR’s Arts Vibrancy Index through policy outcomes that affect arts and cultural funding, economic development, and cultural tourism.

Where new American populations live in the U.S. plays a critical role in how they adapt to their host society—and how their host society reacts to their presence. In small towns, immigrants are less likely to feel the same familiarity they would in large cities. While vibrant artistic elements such murals, music, and dance remain constant, the tacit and often informal traditions embodied in foodways, medicinal remedies, plants and landscapes, religious expression, and athletics are the salient signs of cultural vibrancy in small towns. In the absence of physical gateway markers such as urban ethnic commercial corridors or religious architecture, these activities are often the only signifier of new influxes of populations. Furthermore, these activities provide a venue for inter-generational learning and aid in diffusing tensions and bridging connections between new and pre-existing populations.

The future of arts vibrancy lies in understanding the ways in which seismic demographic shifts affect immigrant agency and inclusive expression outside of mainstream metro areas. In the 21st century, small towns are not just the vanguards of local urban policy; they are also a profound untapped engine for catalyzing arts and cultural vibrancy in overlooked communities across the U.S.

John Arroyo is a PhD candidate at the MIT Department of Urban Studies and Planning (DUSP) and a Research Fellow in Global Social Protections with the Transnational Studies Initiative at Harvard University. John’s research focuses on the spatial dynamics and policy implications of Latinx migration in New Immigrant Destinations.